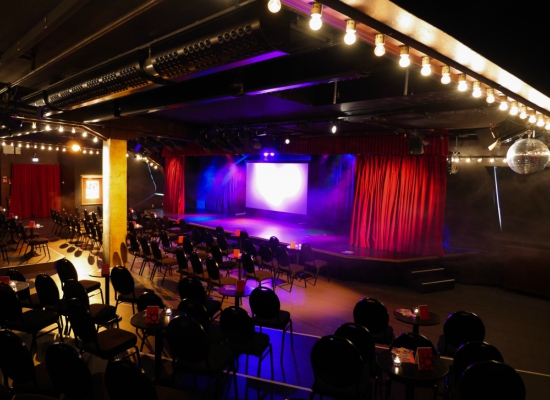 Discount: 20% off for all tickets (with reservation by phone, subject to availability. Except third party events and New Year’s Eve)

The Home of Cabaret

The Berliner Kabarett Anstalt (BKA – Berlin Cabaret Institute) has been offering smart cabaret, comedy, exciting concerts, and children’s theater since 1988, and hosts the only weekly concert series for new music in all of Germany every Tuesday.

On the rooftops of Kreuzberg

The location already attracted 150-year-old Berliners who wanted to have fun to Belle-Alliance-Strasse 7-10, today’s Mehringdamm 32/34. The comedian August Wolf ran an open-air theater with a summer garden and a dance hall; the program included folk theater, cabaret and variety shows. When the stage burst at the seams and in order to be able to play even in winter, the dance hall was modeled into the Belle Alliance Theater with 1,500 seats.

The venue was demolished in 1913 and the building, which is now a listed building, was built. After the Second World War, the Belle Alliance street became the Mehringdamm, on the 5th floor of the number 34 a casino was built, into which the discotheque “Dachluke” first moved, and in 1988 the BKA.

Your benefit with the QueerCityPass Berlin: 20% off for all tickets (with reservation by phone, subject to availability. Except third party events and New Year’s Eve)